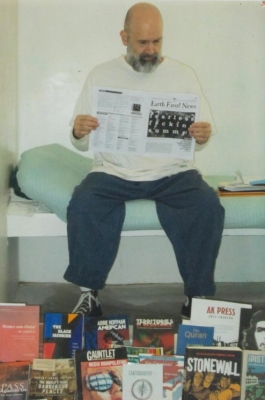 On many levels, prisons are made to be deliberately toxic. Prisons are, by design, to inflict punishment on humans, and so prisons operate to traumatize, to injure, to harm, to toxify.

Toxification is, after all, inflicting permanent trauma, permanent injury, so as to ruin something or spoil it. To toxify something is to poison it.

So, consider for a moment the mentality behind imprisonment. The official position, of course, is that prisons “reform” or “correct” or “rehabilitate.” Those who operate and maintain the prisons allege to be performing a public service by taking offenders, criminals, law violators, and by imprisoning them, by taking them through the process of imprisonment, fashion those offenders into better people. The official story, at any rate, presents prisons as places where bad people get “fixed” and become better people, and that all of this is undertaken, at a cost of billions of dollars, for the benefit of society.

That is the cumbayah version of why prisons exist. By this version, prisons take “toxic” people and essentially de-toxify them. The humans delivered to prisons are already ruined, poisoned, spoiled, toxic- and they are to leave prisons less so, for the betterment of the world.

But, when we look at this system that is alleged to de-toxify the toxic specimens of society, we do not encounter any of the processes that social scientists would prescribe for such an ambitious mission. In fact, all of the necessary components for socially de-toxifying humans are conspicuously absent. What we find instead is a vast machine to inflict more trauma, more injury, more harm. What we find is a process for turning toxic people more toxic.

So, if we attempt to give prison (mis)managers the benefit of the doubt, if we presume that instead of being dishonest (and mean and socially destructive) we presume that they are merely ignorant—chronically ignorant, over the course of decades and centuries—then we would conclude that prison (mis)managers, in their ignorance, truly believe that inflicting all of the things that make people worse will make people better. We would have to conclude that prison (mis)managers never notice that over the centuries of their continuous failure to make “bad” people into “better” people, the infliction of wanton trauma and injury and harm only make the people in their custody worse.

All of that is pretty difficult to accept. It occurs to me that over the centuries of this trauma machine grinding along, someone working within it- a warden, a guard, someone- had to realize that more of the problem was not a solution to the problem, that making people more toxic would not make them less toxic.

This means that everyone working within that system is knowingly participating in a vast crime, an offense against social order, contributing to more harm, more trauma, more crime… and they do so, ironically, while claiming to be doing just the opposite.

As I write this from Ohio’s supermax facility, I am constantly reminded of the prison system’s hatred, fear, and loathing for the natural world.

Human physical and psychological health are increased and maintained by our connections to other living things. As social creatures, we require interaction with other humans, certainly, but on many levels we seek connection with the organic world. In the absence of living in the wild, we surround ourselves with house pets; while we may not have the luxury of spending time in forests, our streets are lined with trees and our living spaces include flowers and other plants. Our lawns surrounding our homes are generally green and alive.

Now consider the prison complex. This machine of deliberate social toxicity constitutes a kind of “dead space,” an area of concrete and steel where organic life is completely absent. Prisons are social spaces that are designed to be as “unnatural” as possible, monuments to ecological destruction.

Not only are prisons constructed in this way to make the setting as physically and psychologically unhealthy for the captives that prison (mis)managers intend to warp and distort, but the very mentality underlying imprisonment, the worldview of those who build cages and put humans in them, really understands the natural world as an enemy.

Consider, at least in Ohio, lower security-level prisons will often have grass on the yard and probably a few trees and bushes. At some prisons, selected prisoners will maintain flower beds that beautify the front entrances of housing units. Other selected prisoners may maintain dogs as part of a dog-training program, providing prisoners with the opportunity to interact with non-humans.

At higher level prisons, prisoners’ interaction with the organic world greatly decreases. The trees and flowers and bushes are gone, the dogs are absent. Even interaction with other humans becomes greatly circumscribed. Then, finally, at the highest security level, there exists not so much as a patch of grass, no opportunity for human interaction.

Thus, by this hierarchy, we witness not just an increasingly unnatural environment that confronts prisoners as they increase in security, but, on a kind of microcosmic scale, we also witness the extermination of the organic world, the elimination of all connections to life. This betrays the mindset of prison (mis)managers, makes clear their animosity toward not just their captives but toward the organic world, their hatred and suspicion of all things living and wild, their fear and loathing for the community of life.

That is to say, in the minds of those who toxify the imprisoned, trees and flowers and bushes and puppies are “the enemy,” an enemy to be replaced with nothing but dead space, concrete and steel as far as the eye can see.

The prison machine seeks, then, to supplant the natural world and to impose the un-natural world, the one that better serves their aims in traumatizing, harming and distorting captives who can then reasonably be expected, in turn, to toxify the world upon their release.

Learn more about him: SeanSwain.org