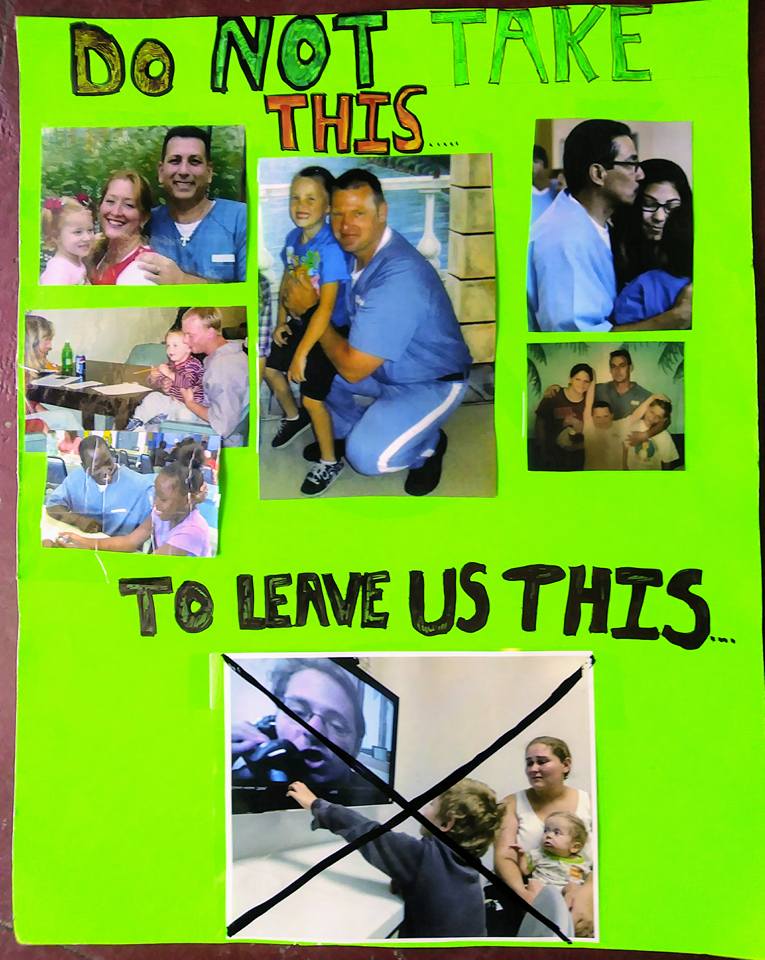 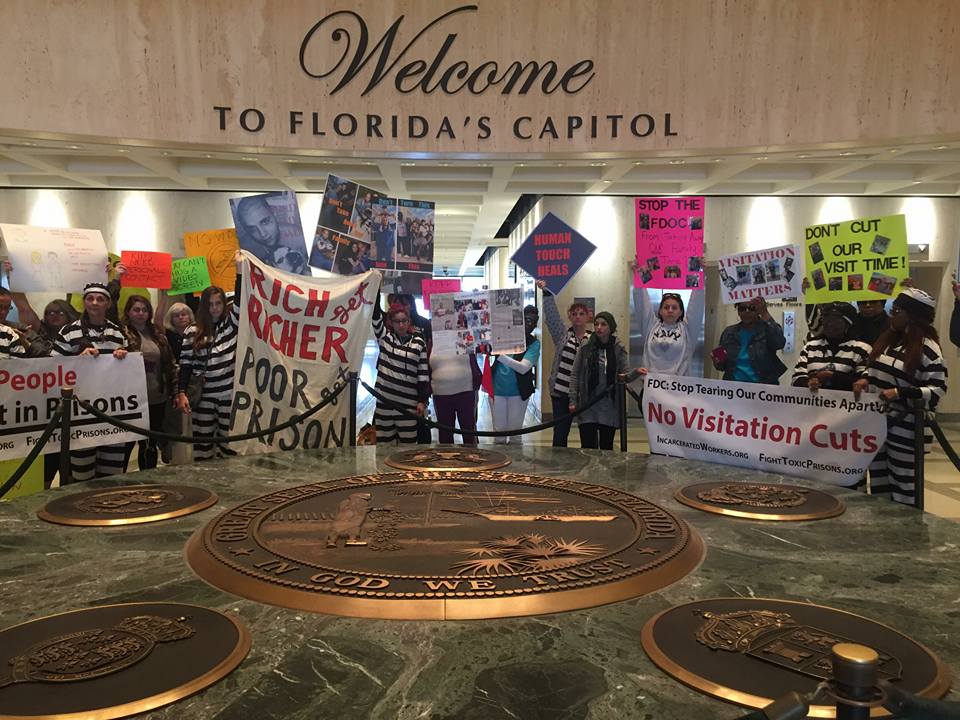 [UPDATE: A second public hearing has been announced by FDOC, May 31, 8 a.m., in response to a request by opponents of the cuts. Details about the hearing can be found here and new language for the visitation policy here, which uses more words than last time, but still keeps the same cuts in place.]

The Campaign to Fight Toxic Prisons views contact visitation as an environmental justice issue as well as a basic human right. Humans are a social species and environmental health depends on the ability to maintain contact with your family and community. Not to mention, the struggle to end toxic mass incarceration relies on communication with our friends and family caged by the system.

On this premise, FTP has joined prisoners and their family members in the outpouring of opposition to proposed visitation cuts.

What follows is the complete text of an edited article printed in the April 2018 edition of the Gainesville Iguana:

In February, the Florida Department of Corrections (FDOC) announced intent to start a new visitation schedule, known as Rule Change, 33-601.722, that could leave a mere fraction of options available to prisoners and their families. Currently, visitation is allowed every weekend, from 9 a.m. to 3 p.m., plus holidays. This averages over 50 hours of possible visitation a month. Proposed cuts would allow FDOC to provide half of the days (alternating weekends) and as little as 2 hours per visit. This could leave an average of around 10 hours per month.

It was been widely studied and reported that frequent visitation is a driving force for prisoner rehabilitation (in the cases where that is needed). Visitation drastically improves the rate of successful re-entry back into society and is proven to reduce recidivism rates—where currently over a quarter end up back in prison within three years. 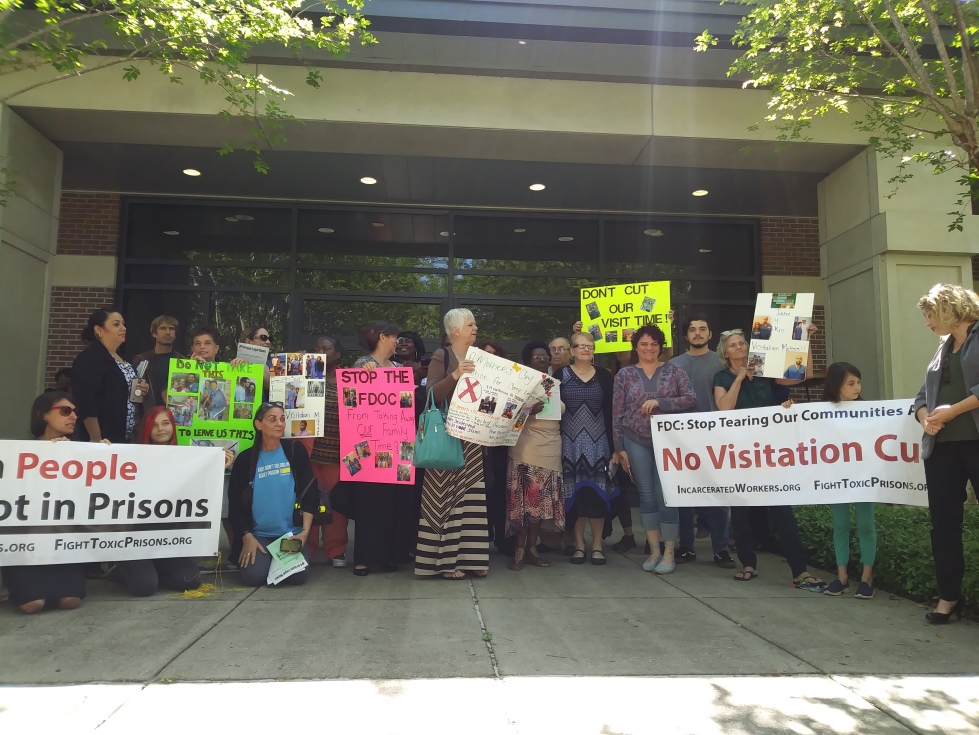 Despite that, FDOC says that cuts are needed in an effort to reduce contraband. But by their own data, only 2.5% of all contraband recovered enters through visits. This leaves 97.5% unaccounted for, and that points primarily to FDOC staff themselves bringing in the drugs, weapons and cell phones.

In February, WFTV in Orlando reported, “In the last three years, dozens of correctional officers and other prison employees have been accused of smuggling illegal contraband into Florida state prisons, but…few of them face prison time for the felony charges related to the crimes.”

These cuts come on the heels of the #OperationPUSH prisoner strike that launched in January, on MLK Day, where cell phones were used to communicate with the outside world about the protests and repression without fear of retaliation from violent guards.

While FDOC administration may never admit the growing protests inside as a reason for the cuts, there is ample evidence in recent months that points to efforts at generally reducing outside contact both by shaking down whole units to retrieve hundreds of contraband cellphones and by repeated excuses for canceling visitation as well as enforcing unnecessary strip searchers and arbitrary rules on visitors to discourage their attendance.

A public hearing was held at 8:30 a.m. on Tuesday, April 3 in Tallahassee. Despite only one week’s notice, over 100 people drove for hours across the state to provide comments on the rule change.

Florida is already one of the worst states for prison visitation (as it is with other bad prison policy and abysmal record of abuse.) New York state prisons, for example, still have visitation 7 days a week. An effort by their governor to cut back to weekends, in favor of expensive video calls, was defeated last year by public opposition.

These cuts in Florida are coming in tandem with a new private contract to provide video calling service for $2.95 for 15 minutes. FDOC says the cuts and the contracts are not related. But those who spoke at the hearing, some who had decades of dealing with FDOC, repeatedly indicated no reason to trust the agency. All signs point to lobbying by the now-merged multi-million dollar contractors, JPay and Securus, as another major factor this decision.

The cuts were supposed to go into effect on a trial basis April 7. That has been delayed by public opposition, though they could still take effect in the coming months, if FDOC chooses to ignore public input.

Written comments concerning the policy change can still be submitted in writing until April 13, 2018, addressed to:

Specific language for the proposed rule change can be found on the FDOC’s website: https://www.flrules.org/gateway/notice_Files.asp?ID=20211228