Environmental and Economic Justice for Appalachia!!

The 45-day public comment period for opposing the federal prison plan on a toxic coal mine site in Letcher County, Kentucky has now closed.

But you can still send a letter to the Bureau of Prisons (BOP) right now stating your opposition to this project. Click here to see a sample letter.

For the those who are thinking that you may have signed a petition or written a letter about this before, we are doing it all over again. Our organized opposition has driven the BOP back to the drawing board twice now, and the plan is still a losing deal for the local community, prisoners, and wildlife. Let’s beat it once and for all!

There are alternatives to incarceration that make this prison unnecessary. A failure to assess alternatives and justify the public need for this massive $444 million dollar project means it must not be approved.

As the Letcher Governance Project (pictured above) has pointed out:

“Study after study has shown that prisons do not create the amount of jobs or economic benefits that officials often tout. And indeed, the planning process for the proposed United States Penitentiary Letcher County (USP Letcher) has largely been done by wealthy and powerful people in the county, without the input of local landowners and citizens… We are deeply concerned with the gradual increase of prisons in the central Appalachian region, and we advocate for a regional economy that is not built on fossil fuel industries and prisons.”

Technically, this is a letter of opposition on the “Draft Supplemental Revised Final Environmental Impact Statement” (RFEIS) comment period, which began on March 24, 2017 and will end on May 8, 2017.

Unsurprisingly, the new U.S. Bureau of Prisons (BOP) report is more of the same: “The Bureau determined that there is no significant new information relevant to environmental concerns and no appreciable changes to potential impacts …” [Source, ES-ii, RFEIS Executive Summary, March 2017]…

The collective efforts of activists across the country over the past two years have kept this project from moving forward. We believe that failing to approve this third attempt at a Final EIS could be the death of this prison for good.

This is also a response to Trump’s claim that he’s “ending the war on coal.” At its core, this prison fight is an environmental justice battle, aiming to support a just transition away from coal and prisons in Appalachia (as opposed to using toxic mine sites to build prisons, exposing prisoners and local residents to the contamination all over again).

Ironically, where coal companies have dodged the EIS process on permitting mountaintop removal mine sites for decades, the U.S. Bureau of Prisons is supposed to be mandated to protect the health of the prisoners it holds behind bars. This process has created an opportunity to take a “hard look” (as required by the National Environmental Policy Act, or NEPA) at industry-related health issues in coal mining areas.

Again, you can send a letter to the BOP right now stating your opposition to this project by clicking here.

“My story is a parable of the choices Eastern Kentuckians face in this period of economic transition. Will we honor the natural history and environmental assets of the region by preserving sites like this?”

Mitch Whitaker, pictured and quoted above, is a Letcher landowner and wildlife rehabilitator, who lives on the neighboring property in Roxana and has taken a stand against the proposed prison.

The Bureau of Prisons (BOP) has technically scaled back the perimeter of this prison by 130 acres (site plan went from from 700 acres to 570 acres), but the very little else has changed.

Despite all the information that has been put on the record on environmental justice, water quality, prisoners’ rights, endangered species and the lack of assessing alternatives to incarceration, the BOP says they “determined there is no significant new information relevant to environmental concerns and no appreciable changes to potential impacts as a result of the modifications to the Roxana site[.]”

Thus we are renewing most all of our initial concerns from other comments over the last two years, with a focus on the need to assess the alternative of reducing prison populations which would remove all concerns with environmental and public health issues surrounding this project.

We send our sincere thanks to the thousands of people and organizations across the country who signed petitions and sent letters over the past two years, and we ask you to do it once more!

Please send a letter and share this link. Click “Start Writing” to see a sample letter to the right.

From the Federal Register:

“At the [BOP’s] public meeting, Bureau representatives will be available at poster stations to clarify information related to the Draft Supplemental RFEIS. Attendees will be able to submit comments in writing and orally to a stenographer who will transcribe comments.

“The Bureau requests and welcomes your comments on the analyses and findings presented in the Draft Supplemental RFEIS for the Proposed USP and FPC in Letcher County, Kentucky. All comments received by May 8, 2017 will become part of the administrative record and will be considered in connection with the Final Supplemental RFEIS.” [Source]

During the 45-day comment period, the public can provide comments three ways:

All written comments must be postmarked or received via email no later than May 8, 2017 to ensure consideration in connection with the Final Supplemental RFEIS. 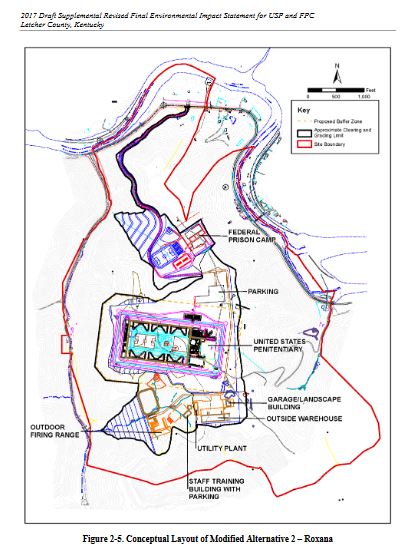 Above, new map for proposed Roxana BOP site, on top of a former mountaintop removal coal mine site.

For info on toxic prison issues nationwide, check out: PrisonEcology.org or FightToxicPrisons.org